In a new blog series called ‘The Big Picture’, we examine the extraordinary achievements of individuals placed by Charterhouse, and look at the tangible difference their work has made to society.

Philip Sarbutt was placed into a senior level Procurement role within the NSW Public Sector in February 2017 by Vasil Spassov, Manager of our Government Specialist Team. As a Director on the Supplier Development Programme at the NSW Department of Family and Community Services (FACS), Philip went on to achieve exceptional results that were formally recognised by the Secretary of the agency. This is Philip’s story…

Hi Philip. Thank you for taking the time out to tell your story. Firstly, can you please set the scene by telling us how you first connected with Charterhouse?

I first connected with Charterhouse in relation to a Supplier Development role with the NSW Government. The Supplier Development program is one of the NSW Procurement Board’s 10 cabinet-approved initiatives under the ‘NSW procurement benefits program’. The program seeks to increase value through deeper collaboration with the NSW Government’s top suppliers.  The goal is to identify and deliver cost, quality and operational improvements that would be difficult through existing tender, contract and transaction management approaches.

He had identified my profile on LinkedIn and thought my background may be a good fit. He invited me to an introductory meeting where he shared the role description and the type of candidate FACS (and DFSI – the program sponsors) were looking for. I was immediately drawn to the challenge of the role and formed a positive impression of Vasil/Charterhouse. We agreed that Charterhouse would put my name forward for the FACS role.

About two weeks later I was called to an interview at the FACS offices. There were 3 people on the interview panel, each a key stakeholder.

Vasil provided me with some excellent background information: about the interviewers, how the interview would be structured, some of the likely areas of focus etc. This helped my pre-interview preparation and increased my confidence going into what can be quite a daunting situation.

The interview process itself took a few hours and included a presentation based on a scenario reflecting the actual problem to be addressed in the FACS Supplier Director role, several competency-based questions and my prior experiences and achievements in other roles.

Later that day I received a call from Vasil indicating that FACS/DFSI wished to offer me the role. I was quite impressed by the speed of decision making.

Please tell us more about the environment at FACS, the project and what its key strategic objectives were?

I discovered a couple of important points early on at FACS that had quite a significant influence on my project. First, on the back of an independent review of the out-of-home care system in NSW, there were a number of initiatives underway to improve outcomes for children in care. Some initiatives focused on preserving families and preventing children from entering care in the first place. Others focused on finding safe, stable and nurturing care arrangements for children who did enter care – either by restoring them to their birth parents if safe to do so, or by providing long-term alternative arrangements with relatives, kin or suitable others.

Second, FACS was undergoing a transformative change in its operating model. Its role as a direct provider of services was changing to being a commissioner of services, where it defines require outcomes and then engages service providers (NGOs) to deliver those outcomes.

My project as Supplier Development Director to build market capacity for permanency assessors for children in care was a small, but important, piece of that much bigger jigsaw puzzle designed to deliver these strategic objectives. A key part of being successful was to recognise this context and align my activities to be synergistic with the organisation’s broader objectives.

What were the issues you helped resolve?

A shortage of assessors was one cause of a substantial backlog in permanency assessments, which in turn led to delays in FACS’ legal and administrative processes and presented a major obstacle to the government’s objective of achieving the permanency goal for each child within 2 years of entering Out of Home Care (OOHC).

What were the implications of these issues on children, families and carers?

The implications of this protracted state of limbo and uncertainty for the children in OOHC, and their families and carers, were risks for the children’s sense of identity, emotional wellbeing and development milestones such as educational attainment. All of which can have negative knock-on effects lasting well into adulthood.

What challenges did you experience with the Project and at FACS?

As mentioned, the FACS organisation was going through a lot of change, so engaging colleagues was sometimes challenging in the context of the myriad of other things they were dealing with. I was really fortunate to find a number of colleagues who shared their knowledge and insights with me and who supported key activities during the early stages of the project.

Another challenge was that there was no blueprint or pre-defined formula for what we were doing, so there was a lot of learning while doing; recognizing when things weren’t working and then adapting the approach or adjusting the priorities to better align with the operating environment.

As this was my first role for a government department, there was also the challenge of learning how things work in the public sector – in areas like delegation of authority, communications, and probity.

What did you achieve?

The key achievement was that a panel of 80 pre-qualified assessors was established and is now operational across NSW. These assessors are available to assist both FACS and NGO partners by providing timely and high-quality permanency assessments for children in out of home care. Contracts are in place with each service provider to drive consistency and clarity of required outcomes, which benefits FACS when engaging assessors and helps the assessors as well.

I’d also like to think that the project provided a good case study on how the supplier development approach can be applied in the domain of procurement of human services.

How was this achievement recognised?

One way this achievement was recognised is that a number of projects in adjacent areas within FACS have used the approach, tools and templates from the Independent Assessors project as a reference. To me, it is the best recognition of all when a colleague says, “I really like what you’ve done there, can you share with me?”

In terms of more formal recognition, the project won a FACS Secretary’s award in the category of ‘Outstanding Performance in a Corporate or Asset role’ 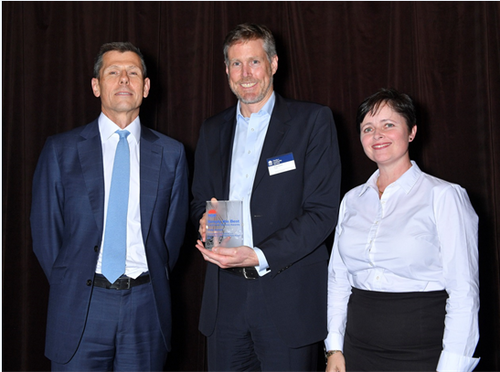 Philip Sarbutt in the middle (pictured with Michael Coutts-Trotter the FACS Secretary and Tanya Davies the Minister for Aged Care), receiving the Secretary’s Award for Outstanding Performance in a Corporate or Asset Role.

Congratulations Philip, your contributions are significant and deserve to be celebrated.